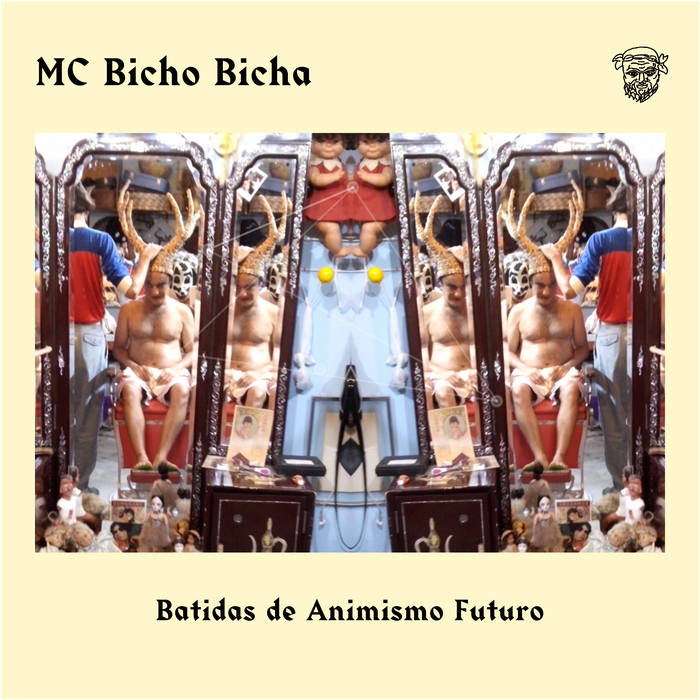 A spectre is haunting the Anthropocene. The spectre of the Caribou Man. Kanipinikassikueu, who abandons the world of men to marry a wild creature of the forest, and who becomes humanity's shape-shifting go-between, ambassador to the deep woods. It is the Caribou Master who provides the hunter with his catch. If negotiated with, with respect.

In MC Bicho Bicha's re-enactment of the story, the turncoat human seeks conjugal relations with Pachamama herself, the fecund plurality of nature. Collapsing into the embracing arms (and fronds and tentacles) of protean recreation in "Musica do Amor".

Doesn't every generation dream of overthrowing "civilization" and submitting to the call of the wild? If so, Caribou Man speaks to us all.

"I've got a deer wife", sang Momus, in his take on the myth. "Keep it to yourself". But MC Bicho Bicha will not keep it to himself. He is potlatch incarnate. Gift economist. All the unaccounted and unaccountable transactions and reciprocations that humanity ignores in its rationally rapacious consumption of the forest. He sees the invisible debts that humanity is blind to.

And now, the Caribou Man is angry.

Contemplating the eco-apocalypse, as even life-giving water turns hostile in "Dono de Cemetario", the self-declared queer animal, post-human, Jake Sully, calls us to a metaphysical insurgency against the evils of humanity, even taxonomy itself. In "Santo-Antonio Trilobita" he summons an army of animated Shoggothian mis-shapes. A courageous carnival of animal hybrids to stand firm and reprimand us.

At first listen, hip-hop, a genre of urban techno-culture and media assault, seems an odd counterpart for the mythological and symbolist poetry of Bicho Bicha's forest-rooted guerrilla warfare. But hip-hop has always been a music of the oppressed and of its resistance. Nevertheless, the tension is made audible here. The flowing rhythms of MC Bicho Bicha's poetry do not submit easily to mechanized beats. Rushing ahead or falling behind as the natural timing of the words overcomes the pummelling drums. The sound-world itself is in conflict, as harsh electronic sounds struggle against samples of birdsong and animal calls. Beats are heavy and loud, but break down in the face of equally strident lamentations. Bright, synthetic tunes seem to try to lure us back to the shiny human world, only to be subverted by Bicho Bicha's more subtle quivering melodies.